DOI: Related Articles. We also hypothesized that the leukemic cells are capable of differentiation. Using loss of heterozygosity LOH and X-chromosome activation, we demonstrated that malignant cells in MDS patients could differentiate to mature hematopoietic cells. We also found that there is significant overlap between MDS and AML when the 2 diseases are separated based on the percentage of blasts. Although our data suggest that the separation of the 2 diseases as recommended by the FAB classification is helpful, classification based on the biology of MDS is needed.

Patients with the t 15;17 translocation were excluded from the analysis because of the specific molecular abnormality and clinical course.

Patients with inversion 16 and t 8;22 are automatically classified as AML in our institution regardless of their percentage of blasts. Patients who had a diagnosis of MDS that did not require immediate therapy were not included in this study. This group of patients is heterogeneous, and diagnoses could not always be established with certainty. Therefore, these patients were excluded from our analysis. When the disease progressed, they were re-evaluated and treated with chemotherapy.

However, CMML patients show high levels of apoptosis, and it remains controversial whether CMML can be divided into dysplastic disease and proliferative disease. All data and studies were analyzed after excluding CMML, and we found no change in our conclusion. Clinical and laboratory data were collected from the Leukemia Department database. Plasma, serum, and bone marrow samples were collected on subgroups of patients in random fashion without specific selection.

To eliminate any possible confounding in study results by freezing and thawing of samples, additional patient samples were analyzed prospectively for apoptosis and proliferation without freezing and thawing. These patients were diagnosed and treated fairly recently and had only short follow-up; thus, they were not included in most of the clinical analysis.

The distribution of overall values was similar using all methods. Protein was extracted from cells by a method previously described. The supernatant was separated and saved. Two negative controls were also used, in which either the cell extract or the substrate was not added to the reaction mixture. An additional negative control was included in which cell extracts were treated with caspase inhibitor before the reaction.

Optical densities were plotted as a function of time, and the slope of the initial linear portion of the curve was used as a measurement of the amount of caspase-3 activity. Mean caspase-3 activity of peripheral blood mononuclear cells from 22 healthy controls was assigned a value of 1. Activity in the leukemic and MDS samples was normalized to the mean of controls.

Spontaneous hydrolysis of substrate in negative controls was negligible less than 0. Caspase-3 activity testing was repeated on 60 samples on 2 different days. No significant differences in results were found for the repeated tests. Bone marrow samples were collected in EDTA tubes minimum of 10 6 cells , and the red cells were lysed and washed twice.

An aliquot of 0. Cells were isolated using double-density Histopaque and to capture mononuclear and polymorphonuclear cells.

Both cell populations were mixed, washed, and stained with annexin V and propidium iodide as recommended by the manufacturer Becton Dickinson, Mansfield, MA. Briefly, phosphate-buffered saline PBS —washed cells were incubated with propidium iodine and fluorescein isothiocyanate—conjugated annexin V antibodies for 15 minutes, washed, processed, and acquired by FACScalibur within 5 minutes of staining. Briefly, cells were washed twice, and 0. Cells in similar number were prepared similarly in a different well.

Cells were then washed and costained with CD34 according to a standard procedure. Maturing myeloid cells and polymorphonuclear cells were separated by negative selection.

DNA was isolated using standard techniques as previously described. DNA was amplified using standard techniques. Aliquots 0. Survival distribution curves were estimated by the method of Kaplan and Meier. The univariate Cox proportional hazard model was used to evaluate a possible association between survival duration and each risk factor. Despite this similarity in overall survival rates, MDS in these patients represented a distinct disease that is clinically different from AML. However, these patients were on therapy, and most died of infection or bleeding.

In contrast, significant numbers of AML patients had high percentages of blasts despite the fact that they died of infection or bleeding. The possibility remains that the low percentage of transformation was caused by the death of cells through chemotherapy. Regardless of transformation, MDS is an aggressive and deadly disease. However, evaluation of the percentage of blasts in the bone marrows of these patients clearly shows gradual changes in number without clustering Figure 1.

Telomerase activity was measured by an arbitrary unit as defined in Verstovsek et al Caspase 3 activity was normalized to the average detected in normal control, which was assigned a value of 1. There is no bimodal distribution for the percentage of blasts. Patients with acute progranulocytic M3 leukemia or monocytic leukemia M5 were excluded.

MDS is characterized by the presence of dysplasia in myeloid, erythroid, and megakaryocyte cells. Close examination suggests that the dysplastic changes may represent increased apoptosis. Condensation and fragmentation of the nucleus and clumping of the chromatin seen in MDS are all known characteristics of apoptosis.

MDS symptoms: What are the signs of pre-leukemia? 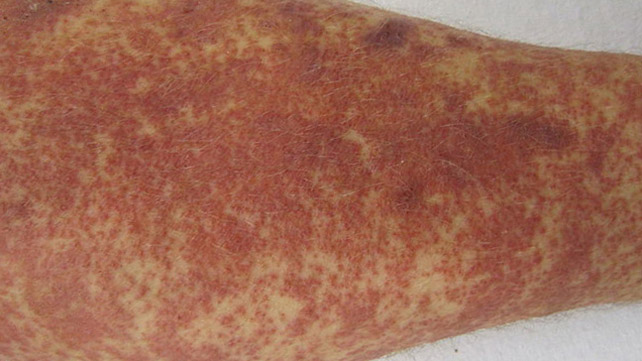 C Box blot showing significantly greater percentage of cells with disturbance in mitochondrial potential from patients with various subtypes of MDS than in those from patients with AML. The more oxidative phosphorylation, the more ATP. Here is the important part: While CD is not directly druggable, the pathways of increased protein production and oxidative phosphorylation are. Omacetaxine mepesuccinate is a protein synthesis inhibitor, FDA approved to treat chronic myeloid leukemia.

As with protein synthesis, drugs exist to block oxidative phosphorylation. One of these drugs is venetoclax. Importantly, because it is only these pre-leukemic stem cells and not healthy stem cells that rely on protein synthesis and oxidative phosphorylation, it is only these cancerous cells and not healthy cells that are killed. Both drugs are already FDA-approved for use in human patients, raising the possibility of immediate use. We hope that omacetaxine and venetoclax will be a potent combination against advanced MDS," Jordan says. Note: Content may be edited for style and length.